About Your Hosts? Phil & Ilene 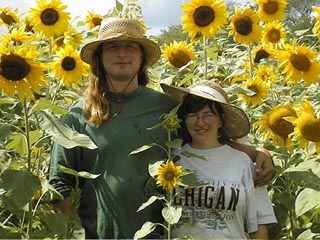 The house concerts came first. In 1999 Phil and I decided to throw a living room concert featuring friends who happen to be great musicians Richard 'Dahl, Cletus Kennelly, and Lea. The concert was a sold out hit and the requests from artists flowed in. Suddenly we had a monthly series booked. It just happened, and we loved it. We love having people to the house, to experience the farm and good music in a friendly setting. We saw how much people enjoy an opportunity to be on the farm. This led to the idea of a Community Supported Agriculture farm (CSA), which we began in 2000.

Phil and I come to the idea of a CSA from two places. Phil wanted to grow a market garden but he didn't want to sit at the market and sell. I had always considered starting an environmental arts camp, but one that's not limited to children. Community Supported Agriculture combines both ideas--it is farming without the marketing; it is hands-on environmental education for all ages.

About Phil? Phil had never run a farm, but then again he read a guidebook and built a beautiful house and he had never done that before! He is a Phil of all trades. He worked for the Fish and Wildlife Service radio-collaring wolves for observational research in Minnesota and Alaska. He can do a serious wolf howl. He is a computer programming consultant. He has always wanted to recreate his grandfather's Pennsylvania farm. He has an electrical engineering degree from Rochester University.

About Ilene? My academic interests focused on the theme of people and the environment. I have an undergraduate degree in Psychology from Washington University in St. Louis and a masters degree from The University of Michigan School of Natural Resources and Environment in Behavior/Environmental Psychology. My graduate work allowed me to create and contemplate the perfect career goal that no little box in the Classifieds would describe. The farm provides the setting for experiential environmental education, creating a community willing to touch the natural world and be touched by it. Much of my gardening has been in community settings-at Co-op plots and at a historic farm. I have also worked in community events programming and arts-in-education.

Go to the Environmental Education link for more about Ilene's thoughts on the topic.